The biggest comic con of its kind on the south coast, Portsmouth Comic Con – International Festival of Comics, returns for its third year on Saturday 7th and Sunday 8th May 2022. Offering the best in comics, cosplay, film, TV and pop culture entertainment, Portsmouth Comic Con will welcome some of the greatest international comic artists and writers, alongside stars of the screen, immersive experiences, and the wonderful world of cosplay to the Portsmouth Guildhall. 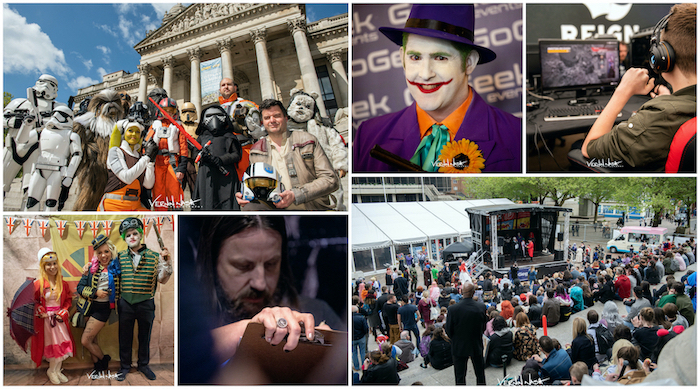 After a two-year hiatus due to COVID, Portsmouth’s third Con will feature more panels, displays, exhibitions, gaming, VR and steampunk than ever before, alongside an incredible range of merchandise and collectables, for those who are serious about comics and the universe of Marvel, DC and cult series.
Spread across Comic City and Comic Village will be the best traders, merchandise stalls and independent illustrators. Visitors can meet some of the greatest writers and illustrators from the world of comics in Artists’ Alley, sponsored by online specialist marketplace, Catawiki. Comic guests who have reconfirmed their attendance include Troy Alders, Marguerite Sauvage, Janet K Lee, Gary Erskine and Laurence Campbell with multiple Eisner, Harvey and Inkpot award-winning artist and New York Times best-selling author, Adam Hughes.
Throughout the weekend, there will be a fascinating range of panel discussions and Q&A sessions including: in-depth interviews with Adam Hughes, Rick Leonardi and Stuart Moore about their legendary careers in comics; drawing workshops with the supreme draftsman Gary Erskine; writing masterclasses from Rob Williams; and a fascinating glimpse into the process of peerless artists Marguerite Sauvage and Martin Simmonds. The website will continuously be updated with the full schedule so please do keep checking portsmouthcomiccon.com.
They’ll be joined by stars of the screen including Pam Rose (Star Wars Episode VI, Batman, Superman), David Bulbeck (Labyrinth, Muppets Christmas Carol), Brian Wheeler (Star Wars Episode VI, Harry Potter), Madeline Smith (James Bond, Up Pompeii) and Britain’s smallest man, Michael Henbury (Star Wars – Return of the Jedi, Labyrinth, Harry Potter).
Special features for 2022 include the Star-Wars Walk-Through Experience; She-Quential – A Celebration of Female Superheroes; and A World of Witchcraft and Wizardry.
The Star Wars Walk-Through Experience (Saturday and Sunday) will enable guests to feel like they are part of the Star Wars universe. Created by the Joker Squad and Isle of Wight Props Crew, visitors will explore the world of Tattoine before being transported to the moon of Endor with its Imperial Bunker, speeder bikes and an interactive Ewok experience.
She-Quential Saturday will celebrate some of the most inspirational characters ever created, including Black Widow, Captain Marvel, Supergirl and more, through a range of international guests, panels and cosplayers. Laydeez Do Comics, a female-led comic forum, will be leading a ‘Graphic Novel Your Life’ workshop, talks and a Q&A.
On Sunday, the magical World of Witchcraft and Wizardry honours the fantasy novel and film worlds of Harry Potter, Lord of the Rings, Excalibur and many more with costumed characters, props, games, a wand-making workshop and a School of Wizards-themed cosplay parade.
People of all ages are being encouraged to unleash their creativity and participate in the daily adult and children Cosplay Parades, with some great prizes to be won. Hosted by GoGeek Events CIC, the highly popular parades celebrate the diversity and inclusivity of the spectacular world of cosplay and costuming, and continue to ensure that Portsmouth is one of the friendliest comic cons around.
There is also a wealth of exhibitions and displays to explore, with visitors able to go behind the scenes of film and TV. Marvel at FX artist, Gary Pollard, who has worked on Jim Henson’s Creature Workshop, Red Dwarf and Harry Potter, as he demonstrates his amazing skill in prosthetics. Travel through time with an exhibition of Dr Who props including Davros, Daleks and a Tardis. A unique exhibition on The Clown Prince of Crime reproduces covers and comic art of DC’s most iconic villain, The Joker, while Bournemouth’s Westover Gallery returns with a collection of signed and limited-edition pieces for purchase.
In the VR/Immersive Tech & Gaming Zone, you’ll be able to see how the creatives of the future use technology to produce the things you love to watch and play. University of Portsmouth staff and students will be sharing their passion for dinosaurs through digital painting, their interest in VR through their cyborg experience, making TV programmes and playing student-made games. You’ll also be able to check out VR motion simulators and a gaming LAN with Reign PC Gaming by Novatech, one of the largest retailers of computer products in the UK.

In the Interactive Zone, get hands on and have some fun with retro computer gaming from Game Over or try your luck at a selection of hundreds of classic and modern board games from Dice Portsmouth. The Steampunk Deck also returns with a ‘Witches & Wizards’ Steampunk theme, led by The Gosport Steampunk Society. Visitors can expect a photobooth, shooting gallery, tea-duelling and this year’s new sport, wand-duelling!

A range of day session tickets and great value full weekend tickets are available at www.portsmouthcomiccon.com.