The following Q&A with Charlie Adlard happened on Sunday at the Wicksteed Park during the Northants International Comics Expo in September, 2012.

Aren’t you bored drawing these characters after all this time?

Charlie Adlard: No not at all. Robert [Kirkman] writes interesting and exciting scripts. Keeps me excited about the Walking Dead. The day that stops will be the day I finish but there’s no reason to stop now. And Robert is still as fired up about writing the Walking Dead as ever and so am I.

Your 100th issue is shortly coming, do you aspire for new challenges?

Adlard: Yes I mean it’s very exciting embarking on the new era for the characters because of things that happened in issue 100 which keeps the book fresh. Fresh for both of us.

How much influence do you have on the scripts by Kirkman? Does Kirkman allow changes or do you only talk about the panels and scenes together?

Adlard: Basically we worked together for so long that we know how each of us works so I leave him to do the script he leaves me to draw the artwork it’s as simple as that. Very very rarely will either of us want to make changes to each other’s work. We trust each other and we know our strength.

Are you watching the Walking Dead TV series? If so, do you think if the actors represent the comic characters well?

Adlard: Yes of course I watch the TV series and I already watched a few episodes of season 3 as well and I was on the sets as well. So I think the actors captured the characters really well and in anticipation with the other question I don’t think they necessarily have to look like the comic characters so long as they are the characters. From that aspect it works perfectly. 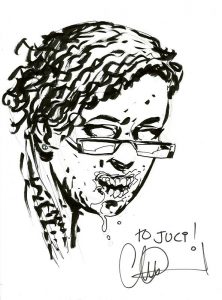 Aren’t you annoyed when they use some characters in other ways or even new characters or use scenes for sensation only?

Adlard: No not at all because it’s the case of you’re damned if you do you’re damned if you don’t and people who are comic fans are probaby moaning about the fact that it doesn’t follow exactly the plot line of the comic series but I think if it did comic fans would also moan about the fact that it did follow the plot lines. Because they’d be watching the same thing again twice so what’s the point? So I think the TV show has to be his own beast and in the end the TV show does follow the basic plot line of the comic so it’s not like it’s going off in some factor that’s completely alien to the comic. They’re still in the prison all the beats are being hit. It does wear off on to other directions but that’s good it keeps that show fresh as well. And then you watch it whether you’re a comics fan or not you watch that and you’re surprised at the TV show and that makes that exciting and it makes exciting for me to watch because I don’t know what’s happening either. What’s the point knowing that at some point character X is going to die? Where’s the fun in that? The fun in watching something like the Walking Dead is not knowing if someone’s going to survive.

What do you like to draw? Zombies? Tanks? Or wasted landscapes, destructed buildings? What do you only draw for routine? Faces of female characters? Checked shirts?

Adlard: Actually tanks are probably my least favourite things because vehicles are a bit of a pain to draw and they’re also time consuming.
If it’s a question what I do in my spare time? I have no spare time.

Do you plan to continue Codeflesh? If so, when can we expect it?

Would you be happy to draw Rick’s death finally?

Adlard: Ha – remember, no one is safe! Actually “happy” is probably not the right word if the end is in sight for Rick – I enjoy drawing him too much. But when the time comes – IF the time comes – I’ll be ready…

How can one artist consistently draw 12 issues or so in a year?

Adlard: Oh for me quite easily you know I’m just naturally fast. My kids go to school I start work, I work 9 to 5 have a break for lunch and when it’s dinner time I finish work. Occasionally I get up early in a weekend to do a bit of work but I don’t like working weekends and try to avoid that because it’s meant to be family time. I can do an issue every 3 weeks. We were doing that up till issue 100, from January to June we were basically putting out an issue every 3 weeks. So yeah if I ever do an issue in 4 weeks that’s really slow for me.

What would you do in a world like the one in the Walking Dead? For how long would you survive in your opinion?

Adlard: Probably about 2 minutes. Well, I mean I’m an artist I’m not a survivor. 🙂

Who was your favourite character that died and would revive if you could?