This interview is about the mysterious Jimmy Broxton who works in comics but does not give too many interviews. So please enjoy this rare occasion.

Jimmy Broxton: I’m a graphic artist and designer, based in the UK, comic art is my main focus as telling stories is my passion.

What was it like working on a comic book like Knight & Squire for DC Comics with writer Paul Cornell?

A dream job, Paul [Cornell] is incredible, he understands so well how to entertain an audience, but make them think as well, not in a dry way, he builds worlds, and the rest of us get to play in them, either as readers or collaborators, the world of Knight and Squire, as envisaged by Paul is quite something, a world I’d love to revisit one day (hint… hint).

In Knight and Squire I would guess you and Paul did your own ideas? Was it difficult to get them through editorial? Each issue had an interesting appendix about British slang and history which was very clever and instructional for non-Brit people.

Most of the ideas were Paul’s of course, he ran the show, I added layers of my own, and the odd character here and there (Birthday Girl being my favourite addition to the K & S mythos, a throwaway character I put in the background, which Paul took and did something wonderful with I think). It wasn’t a case of getting things through editorial, the scripts were approved before I drew them, but on occasion I came up with images that were not deemed appropriate, for example, in the scene where the Organ Grinder is asking for directions in Mr Patels’ newsagent, I added a generous selection of “top-Shelf” magazines in the background, some did not make the cut, I distinctly remember the lovely Janelle Asselin (our editor) saying to me: “If you think DCU is going to publish a comic featuring a magazine called “Lick-ASS” you are very much mistaken”. The less said about what I did with the Milk of human kindness the better, one day, all will be revealed.

What are your future projects, Jimmy?

Right now I have my ongoing series with Guy Adams for Madefire: The Engine, a very cool iPad/iPhone comic strip, and also GOLDTIGER, and another as yet undisclosed crime/horror prject which I think will surprise a lot of people.

What technique do you use? Are you doing things 100% digitally or is there some produced artwork for your projects nowadays?

No, all my art is hand drawn, with pencils and ink (brushes, pens etc), very old school, I even do my lettering by hand sometimes. So my art actually exists, but I never sell it, so any opportunity to get it is very rare indeed. Most of my colouring is done on the computer though, Photoshop/Illustrator etc. 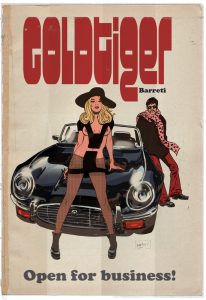 Well, Sex and Violence is not slowly coming to fruition, it is finished, it was practically done before Jimmy [Palmiotti] and Justin [Gray] launched the Kickstarter. Printing takes time, and there were lots of very cool incentives that could only be done after the project got it’s backing, Jimmy runs a very tidy ship, I was very pleased to be asked to contribute to Sex and Violence. Right now of course I have my own Kickstarter project with Guy Adams, something a little different, that is probably best explained by looking at this page: http://kck.st/Vl9xTt

How did Goldtiger come into your life? Why is it so important to Jimmy Broxton?

Goldtiger is the project I have been wanting to do since I was a kid, this is dream come true time for me, it’s very exciting…

So let me get this straight, this is a comic strip book that includes a lot of things from the past, present and even future. I mean you guys write and draw quite a few stuff for this Kickstarter book.

I honestly don’t think there has been anything like it, we do so many different things, the medium of comics is pushed to the limit, we don’t just break the 4th wall, we build a 5th and smash that as well.

In my opinion JimmyB is a one of a kind rare artist who has almost unlimited styles. How do you manage to do this? Looking at your first sketchbook published last year it’s almost unbelievable how many different styles are in there.

That is very kind of you to say so, I’m not sure I have so many styles, I like to experiment, with design, technique, materials, all of that is cool, but art is about communication, I’ll attempt to do that in the most effective way possible, if it’s a dry brush or a digital construct, or found images… it matters not. If what you do has honesty and truth (a few tits and explosions also help) it will resonate, at least that’s the plan. Here’s to resonating… oh, and drinking.