I enter a studio three completely different artists share. The space to me looks tiny but we fit, there’s even a full bicycle in there somehow. There are paintings everywhere and we spot a drawing table and loads of FedEx boxes. I am in Scotland, in Frank Quitely’s studio which he shares with two more artists, Daria Zapala, painter and printmaker and Barry Thomson, animator and illustrator.
Frank asks me if I’d like a cup of tea and exactly like in a Scott Pilgrim scene he quickly – in beautiful Scottish accent – describes the list of types available. I pick the most obvious one: Earl Grey. Cameras are set up and after an hour we finish the interview and then comes the real magic. There’s a saying never meet your heros. I never experienced that to be true and if I somehow let this hard-earned opportunity slide I would have regretted it forever.

All the footage is done and Frank is showing art he has done over the years from All-Star Superman or as the team of writer Grant Morrison, Jamie Grant and the editors mentioned ASSMAN. He shows me his favourite panel from the whole book and it is a simple one. Or is it!? Frank tells me that it took him quite a long time to figure out the composition and perspective in that one small panel the audience probably looked at for about 5 long seconds. This is his craft, this is him, a true craftsman.

I remember I totally forgot to ask him about the animated short Nothing to Declare directed by Will Adams which was funded using Indiegogo, a crowdfunding website. I really wanted to talk about it as he told the South Lanarkshire Comic Con audience the previous day that the story is from his new work-in-progress graphic novel he is writing and drawing all by himself. I try to calm down by telling myself I can always do this another time in another interview. 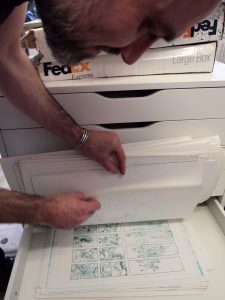 My eyes wonder and find the FedEx boxes again, Frank tells me he is collecting art for an exhibition he is having at Kelvingrove Art Gallery and Museum and he is just about to drop them off at the venue. The exhibition does not only feature his work but it’s going to be even bigger and better than the one in 2016. He says he’d rather not open the boxes again and instead opens his specifically crafted drawer for original art.

Loads of original pages and covers ranging from even the beginning of his career. We see The Greens pages from Electric Soup and a lot of pages from New X-Men and even hand-painted art from Missionary Man and Shimura. Frank tells a story about his Sandman: Endless Nights graphic novel, how he got the job as it was originally intended for the late great Jean ‘Moebius’ Giraud by Neil Gaiman. He accepted it as his deadlines weren’t as strict as usual and he could finally hand-paint a whole story all by himself.

The studio is small, accidents are prone to happen so we go to the lobby and sit down on the sofas. Frank starts talking about ASSMAN and how Chip Kidd, designer of the famous logo wanted to buy the last issue of the comic. Frank convinved him to take issue 10 instead, because he thought that was the best issue art and storywise. He also mentions how Grant Morrison convinced Chip to buy the much more action-packed issue 2 of Batman and Robin instead of the first one. Chip Kidd is a serious art collector and Frank starts talking about how his novels and design-themed books are his favourites. He suggests Good is Dead, Go and The Learners for reading and I put them on my pull list immediately.

Sadly I can see the end of our conversation and I say goodbye, thank Frank for giving me a whole hour more from his precious time than we originally agreed upon and go to my hotel trying to digest all the things I’ve heard and learnt and forgot to ask from that day I interviewed Frank Quitely…