I had the pleasure of interviewing Abhishek Singh during his one-week visit to Budapest, Hungary for the GODDESS | WOMAN exhibition that runs all the way till January 2019 at Ferenc Hopp Museum of Asiatic Arts. In this one week he did a big painting sized several meters by width and height from start to finish which will be exhibited along with the other works.

His comic Krishna: A Journey Within was released in 2012 by Image Comics but the project originally intended to be an animated movie so his style is quite different to his usual figuresque work. He has done a lot more comic work for Indian comic publishers that’s more difficult to get hold of. Right now he is working on a 10+ volumes epic story he wants to finish before releasing a single volume or page. Abhishek also worked with Juanjo Guarnido on his Freak Kitchen project as an animator.

Milán Kovács: Krishna: A Journey Within was released in 2012, what comic are you working on right now? 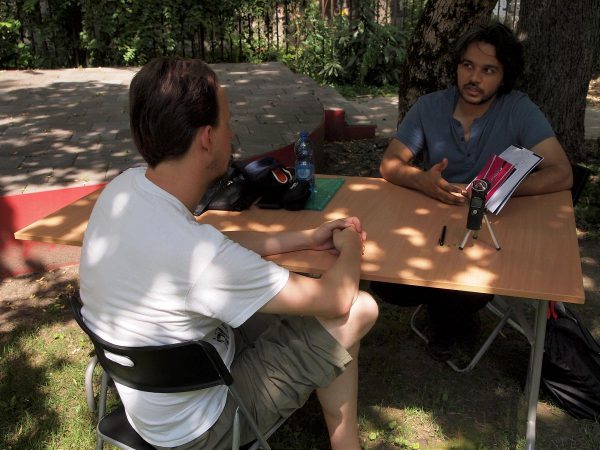 Abhishek Singh: I’ve been working on the next book for already 10 years.

It’s going to be massive, I’m slowly just developing it and planning to release it in volumes.

Yeah, it’s going to be a science-fiction/fantasy comic. Incorporating mythology but it’s not going to be a story from India. I would like a completely new story but I wanted to do it in a depth, with a lot of research and development phase. It takes time as you also have to grow with the story. Every year I’m learning something new and it’s becoming part of the story.

So you are writing and drawing it at the same time, right?

I usually write and draw the books I make because what I like about the medium of comics is that they are so accessible if you make a story you want to tell you only need paper and pen. It is an easy medium but of course making it can be very challenging. It really says a lot about you as well, where you are in your life and what kind of stories you want to tell. And when you start to develop an idea you don’t know if it’s going to take a year or 10 years, you want to do it as soon as possible and it normally wouldn’t take me more than 4-5 years but I realized that stories can make their own lifes and become creatures like dragons devouring as much time as they want [laughing]. You have to let them take the sky. 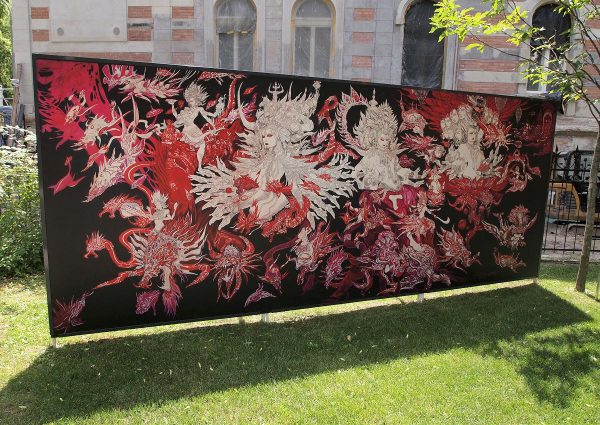 That’s exactly what you told viewers on Facebook live as well that sometimes you just get lost in drawing and you don’t even talk when you create, you become one with the drawing.

Yes, because you are participating in a very magical process where you are basically creating life, or an illusion of it. If you are distracted you miss out on feeling the magic but it depends. There are times when I’m talking while I’m drawing but most of the times I remain quiet and be present. There is a certain deeper aspect of it, you can call it spiritual or something else and you also learn a great deal during the whole process. It took me many years to arrive at this place that I’m confident in what I’m doing. In the past I was just drawing pretty pictures and convinced myself I draw really well. But along the lines you realized that there’s so much more to learn and so much more to draw and it gives you a perspective. I don’t really care how good I am but art gives me appreciation for other art as well so I get really happy when I see good art it doesn’t matter who did it.

Your regular art style is quite different to Krishna: A Journey Within.

You’re right. The Image Comics book was a screenplay I wrote for an animation film. I have a degree in animation and I have been art directing this movie right before this project and then I left that project. I didn’t really agree with the way they were telling that story. I thought to myself if I wanted to tell this story this might be the way I’m going to do it. Of course the style came from animation and I sometimes ask myself if I did it again what I would do differently like tha art and I realized I would definitely do it the same way even though my regular art style is a bit more realistic. I learned so much more this way and if you’re doing the same thing for 10 years you are not learning as much compared to a completely different approach stylistically. I learned a great deal about colors for the moods in the story and the book was in a way an exploration for me on how to use color. 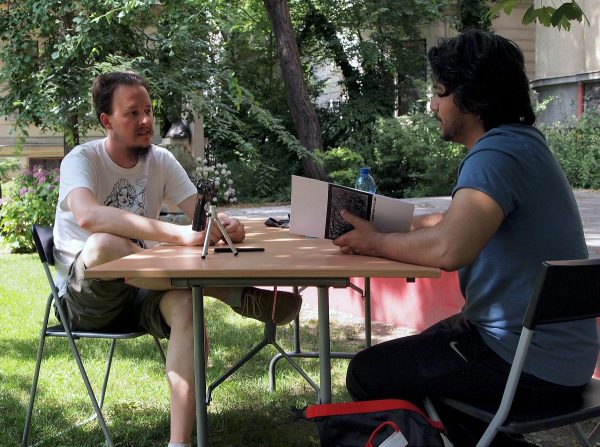 How are you here and what will you do in this one week visiting Budapest and the Ferenc Hopp Museum of Asiatic Arts?

These journeys just sort of come in your life, it wasn’t a planned thing.

So is this some kind of tour, next time you go to a different country?

I’m in the beginning of doing that I was in the United States for a time. I’ve already done this kind of exhibitions in the US and in India. I wanted to take some time to become better, grow as an artist and even more as a storyteller. Even though it’s just one big painting I’m putting together a story from everyday people including local myths in the picture. Let’s say the painting I have made here is a mixture of Hungarian and Indian mythology. I realized myths and folk tales share a lot of common things all around the world and as an artist and storyteller I am just bringing this conversation into my art.
How this all happened is Róbert Valóczi, the curator of the exhibition reached out to me 1.5-2 years ago when my work was exhibited in Houston, Los Angeles and it was also a part of Burning Man. I did a very exciting project in Varanasi where I was actually live painting for 5 days and it was a much larger piece. I think doing it live in front of an audience you make it into a performance but not just of the drawing but people also get curious and ask you questions. So like I said in the city of Varanasi which is famous for the river Ganges which in the recent times became very polluted. The government is trying to clean it so I felt if I did a story of Shiva who drank the poison when it was polluting the ocean and people followed her. And I thought if they follow the god they will also clean the river in the real world. So effectively you are creating a fictional narrative to create social awareness using that mythological story. So this way people get very excited about how this has happened.
So I’m very happy doing this and I always try to be better and work hard.

Thank you very much for the interview, Abhishek!