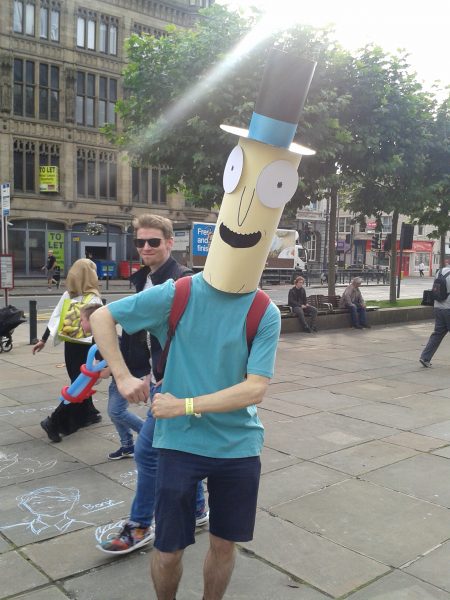 Thought Bubble Festival is one of the best conventions not just in the UK but in the whole world I have ever attended. Everyone is friendly, the writers and artists and all guests are relaxed and the overall atmosphere is nothing short of amazing. The festival’s 2017 edition had a big attendance because the organizers invited a lot of creators from DC Comics’ Young Animal imprint lead by Gerard Way who was also a guest at the festival in union with Nick Derington his co-conspirator on DC’s revival of its Doom Patrol series.

This year the festival consisted of three separate tents over the whole main city and Victoria Hall inside Leeds Town Hall which was a perfect idea to put the action right in the middle of the city where it always should be. Other than the regular convention-goers I have seen a nice bunch of new faces and “tourists” who did not come only for the festival. For a festival it’s always rewarding to expand in a way that more interested parties are getting included.

Obviously the biggest queues were for Gerard Way who is not only known for his comic work but his music band My Chemical Romance. He and Nick Derington revived Doom Patrol for Gerard’s Young Animal imprint idea at DC. At first I was puzzled how his presence will break down the whole festival but in the end I – and the organizers as well – would say the Thought Bubble Festival nicely profited from it.

Brian K. Vaughn of Saga fame was an amazing invitee, he was signing a few hours each day and he as well was rewarded with long long queues from fans all over the world. The regulars like Charlie Adlard from The Walking Dead fame or Duncan Fegredo were also present but since it’s a massive guest list it is really pointless to namedrop everyone. As always Peter Doherty was there moderating the famous – and my personal favourite – Sketching Spotlight panels and they were as always amazing.

Therefore huge applause for the organizers and guests and fans alike having made this once small festival grow up like this and I honestly can’t wait for 2018’s edition!

Lastly here are some photos from The Gallery at 164 holding a 2000AD-themed exhibition which was really good as well: