Mark Laszlo is a 29-year-old illustrator and comic artist from Budapest, Hungary. 2020 could be his real break-through since in a few days Hellboy: Winter Special will be out 15th January. The anthology book contains a Mike Mignola-written 10-page comic of Hellboy which Mark illustrated. The end result is even more special for the artist since the story takes place in his hometown.

Milan Kovacs: I know it’s a somewhat cliché question but when did you start drawing? 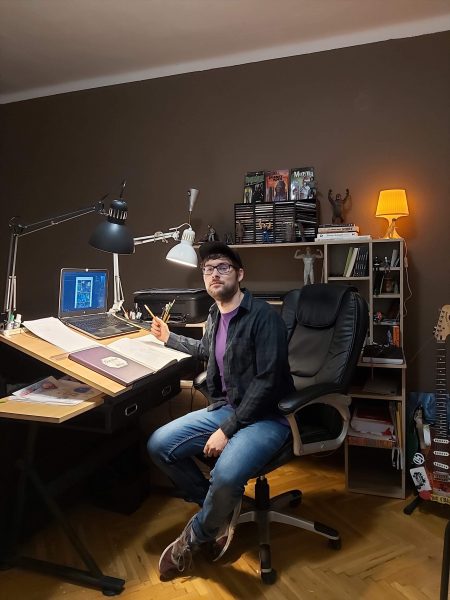 Mark Laszlo: Yeah, my answer will be cliché as well. Ever since I was a little child I loved spending time drawing things and I guess this is how every artist begins. Everything I saw visually striking like ghost-castles or dinosaurs, even Legos, I drew them on the paper. I would say it’s some kind of inner urge for me to draw everything that I like or interests me. One of the first family video tapes ever taken of me is me sitting and drawing.

MK: You just had your comic The Boy Who Loved a Ghostclown published in Hungary prior to Hellboy. How did that one get made? 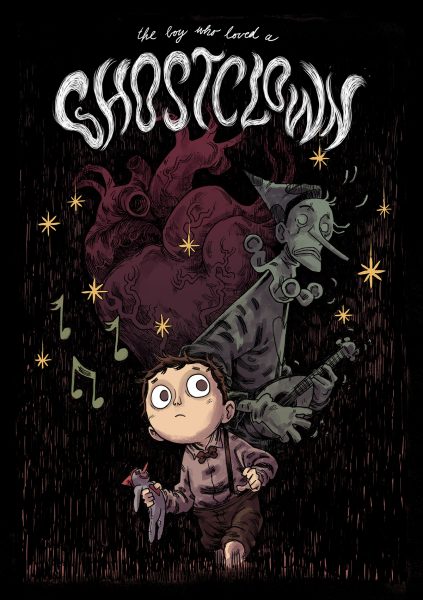 ML: If I remember correctly it started from a doodle where I drew a young boy with a ghost clown behind him, holding a candle in a creepy way as ghostclowns usually do. As for the story it was influenced by lots of personal tragedies like losing friends and girlfriends, or my dog dying. The process of making it was quite long, I chewed and chewed on it for around 3 years and rewrote it numerous times. Then I had to present something for my master degree so I finished it in half a year afterall. But since then I also made some alterations to it before the final publication. And Im still planning to publish it english as well someday.

MK: During this time did you already know Hellboy as a comic?

ML: Sure, I’ve known Hellboy since I was 13-14 years old through my artist friend Miklos Felvideki. We attended the same after-school drawing class and had tons of fun discussing if Mark Bagley did a good Spider-Man or just generally about comics. It wasn’t an instant love with the art, I have to admit, ‘cause I was too young to understand the genius of it, but I immediately saw that Mike had a different approach for drawing and storytelling than for example Todd McFarlane did.

MK: I almost forgot how did you even get in contact with Mike Mignola?

ML: A few years ago there was a contest at Multiversity Comics for Hellboy’s 20th anniversary where you could just send in fanarts. I sent in two.

MK: Now I remember I even voted for you.

ML: Thank you in retrospect especially since I made it to the top 3 and I think Mike Mignola was the last round judge. So I thought It wouldn’t be too creepy if I’d add him on Facebook since he probably liked my submitted artwork. Years went by and I’m pretty sure he saw lots of sketches and fanarts that I made. When an artist you adore makes a comment on your stuff, that feels quite surreal. But the most surreal moment came in the autumn of 2018 just after I just finished a shoes salesman job interview. I remember I was kind of depressed thinking I’ll never be able to make a living as an artist when a Messenger bubble just popped up on my phone and it was Mike, asking me to show some sequential pages he could show his editor.

ML: Yeah it was. I was just standing there looking at my phone. I also cried a little.

MK: Instead of going back and selling some shoes.

ML: Well I still had to get through a month or so selling shoes, but at least I knew I wouldn’t have to do it forever. Even though I never thought it would work out, I sent him some pages from Hungarian comics I drew, and also some samples from the Ghostclown comic. All I expected was an

“Alright kid, not that bad, but get back to the drawing table for a few more years”

or something like that, but to my biggest surprise he said he liked them and said he might has a Hellboy-story for me to illustrate.

MK: It must have been an interesting conversation. Did he tell you anything about the story back then?

ML: Not much in the beginning. To tell the truth the whole thing felt so surreal, I was kinda ready to forget the whole thing and move on, but after half a year or so, he said the script was ready and it would be published in the next Hellboy: Winter Special. Originally it was a Prague story but I guess he knew I was from Budapest, Hungary and asked me if it’d be easier for me to move the story over here. He is such a cool guy like that, he even asked me if I had anything I don’t like drawing – I think I replied that I’ll draw whatever he says, altough I’m not that much comfortable with drawing beautiful/nice stuff like women, etc.

MK: So are there beautiful women in the comic?

ML: Not really. Or maybe there is one, scribbled with like three lines, in a framed picture on the wall of the pub.

MK: It seems like he listened to you. What kind of scrip did you receive?

ML: It was a panel-to-panel one so I’d know what happens in each panel and on the page. The relations in between panels like sizes and shapes were my job to do mainly. It was a much smoother process than I expected.

MK: Let’s talk about your art process. What did you send him back the first time around?

ML: At first I tried to set the mood, get the feel of the story. Hellboy and the two other guys hanging out in some typical shitty hungarian pub smoking, or walking on the cold and grey Budapest streets, stuff like that. Then there were characters I had to design from the script’s descriptions but I had a big creative freedom in these too. I did the layouts for the pages after this. I kinda had – and still have – an imposter syndrome during the whole thing but Mike and the editors were super nice. 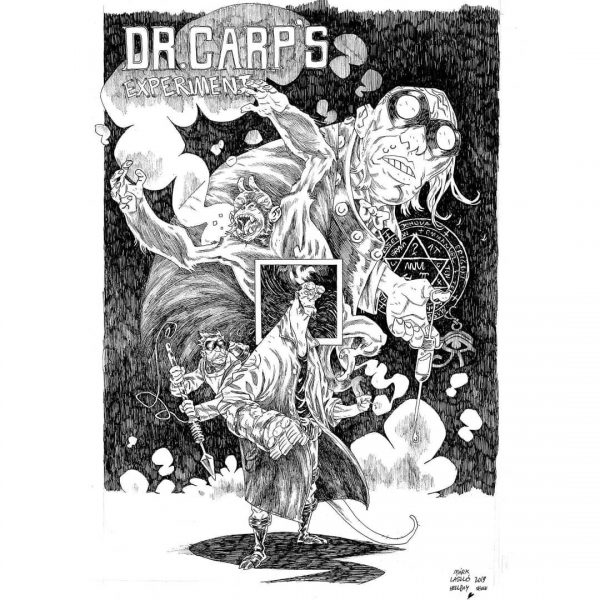 MK: After layouts what was your next phase on the pages?

ML: I started penciling which was done digitally. For me its much easier to do this phase on the computer since that way I can redo stuff much quicker, mirror the image, etc. Usually I start these with a pre-sized page with finished panel borders and I begin drawing the sketches in them. At this stage they are really rough sketches but on the next layer I tighten them up and I keep repeating this 3-4 times until I feel they are ready to be inked. Then after printing them very lightly I can finally start inking which I do traditionally.

MK: You scanned these and sent them back to the team of editors and the writer Mike Mignola and you were essentially finished. But the finished and soon-to-be published comic is going to be in color. 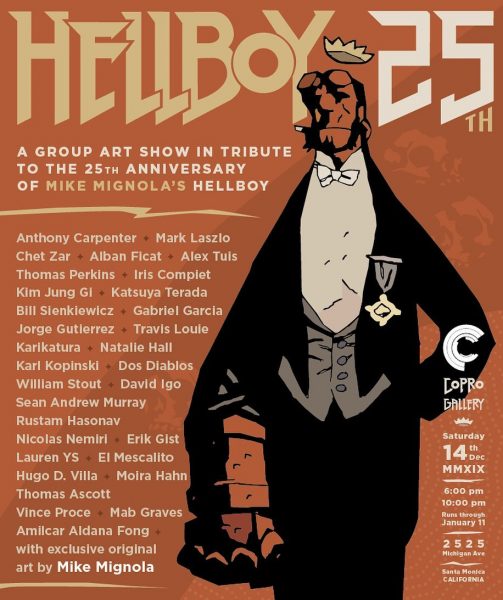 ML: I have to say I was very lucky and also honored to work with two legends at the same time since it was colored by Hellboy’s official colorist Dave Stewart.

MK: They didn’t ask for your help in the coloring process then?

ML: No, the coloring in the Mignolaverse is usually done by Dave Stewart. I sent some color suggestions for specific hungarian stuff like phone booths, road signs and whatnot.

MK: For Hellboy: Winter Special your 10-page comic is finished. What’s next?

ML: Right now I’m working on a 22-page story for BOOM! Studios’s Storyteller title. Its based on a Scandinavian mythology about a creepy ghost-baby. I also had the honor to participate in an exhibiton in Los Angeles at the Copro Gallery for the 25th anniversary of Hellboy. There are some Hungarian projects on the way as well.

MK: I can only wish you big successes on these projects and this 2020 year and onwards. 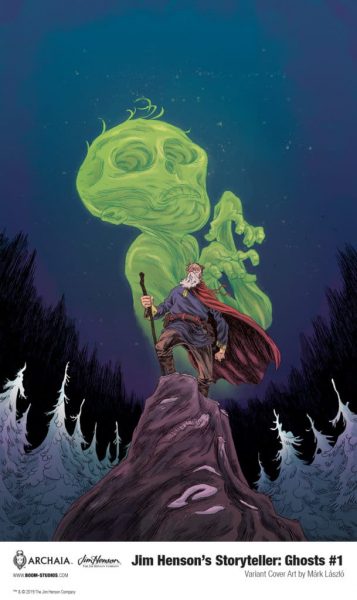