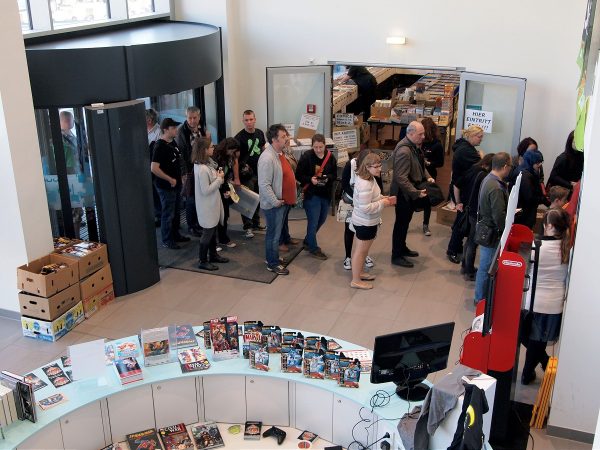 Vienna Comix is always a pleasure to attend, usually not too crowded even though it is a very popular Austrian event. In the last few years I have met several international artists I chatted with and interviewed there and this year was no exception either. The organizers invited Sarah Burrini, Haiko Hörnig, Joscha Sauer, Michael Hacker and lastly DC/Marvel superstar artist Yildiray Cinar.

The festival was nicely organized with clockwork precision as usual. I had the opportunity to record a video of Sarah Burrini sketching her character from Das Leben ist kein Ponyhof (Life is not a Ponyfarm). Nearing the end of the day I met with Michael Hacker, an Austrian-German illustrator who was a real charm to speak to and he also came up with a new character Bat-Pizza-Man to go with his freshly-published pizza-themed book called Pizzeria Disgusto.

In between I was sitting at Yildiray Cinar‘s table chatting and sometimes wandering around the festival. He is an artist I really wanted to meet for a long time now and this was the perfect opportunity at such a relaxed show. I shot a complete process almost from start to finish on his copic marker piece of pirate Wonder Woman and then he even drew me Brezan, his own character soon to be published I hope. It was also worth noting that Mahmud Asrar, who lives in Vienna and has been a long time friend of Yildiray was also visiting with his family. He also had a signing at ASH (Austrian Superheroes) for his variant cover during the day.

As usual there were a lot of cosplayers and a few sketch hunters as well. I’m always happy to see my friend Martin Erasmus who makes this festival a possibility for us. Thank you and hopefully see you in 2018 as well!

Here are some photos I took at the festival, videos are coming later: