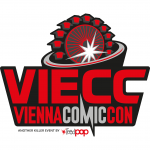 In its third edition VIECC Vienna Comic Con makes everything right to keep old fans interested on the one hand and on the other hand also attracting a lot of new comic enthusiasts to have a great weekend at the convention.

Besides inviting already major names from the comic industry like Mahmud Asrar, Jim Balent or Charles Soule, they invited two of the hottest names in comics as well. First is Adi Granov one of the best Marvel Cover artists nowadays who also managed to work for companies like Sideshow Collectibles and as concept artist for the first Avengers movie. The Second name was probably the main guest for many European fans this year, Scott Synder who is unarguably one of the best comic writers nowadays.

In addition VIECC Vienna Comic Con manages to have a perfect balance between comic and entertainment guests. Where other conventions clearly focus on entertainment guests only, VIECC tries to please both fan groups equally with guests like Jason Isaacs or John Rhys Davies who are only two of the names to mention the high quality of the guests list

VIECC Vienna Comic Con is and was always a very beginner friendly convention as well as attractive enough to be also visited by collectors as well. It’s a convention where you can shop for merchandise, see your favorite actor, meet your favorite comic artist or just have a good time. The halls where not overcrowded at any time though the merchandise hall was always very busy. All in all VIECC Vienna Comic Con is one of the conventions to wait for through the year and I can’t wait which surprises the organizes have ready for next years edition.